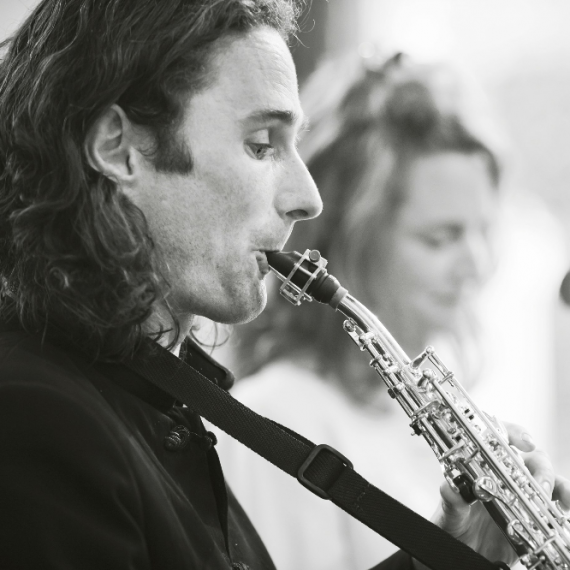 Ken has been an integral part of the Irish music scene for the last decade. As a freelance performer Ken is greatly sought after and vastly experienced in many musical areas. He was recently featured on the soundtrack of the forthcoming Irish film ‘Poker Nights’. In recent years he has featured alongside legendary jazz musicians Bobby Watson and Jon Faddis in concert. As an orchestral instrumentalist he has performed with the Cork School of Music Symphony Orchestra, Cork Youth Orchestra, UCC Orchestra, Irish Operatic & Repertoire Society and more. As a wind band instrumentalist he has played with the Irish Youth wind Ensemble, Trinity College of Music Contemporary Wind Orchestra, Cork School of Music Concert Band & Wind Ensemble and numerous other local and national ensembles. He has been a member of the critically acclaimed UK Saxophone Quartet ‘Intoto’ and was also a member of the innovative ensemble ‘Trinity Saxes’ while based in London.
He has been a fixture on the Cork jazz scene for many years leading his own quartet and jazz-fusion band and was an integral member of the hugely successful Cork School of Music Jazz Big Band where he was regularly featured as soloist. Ken has been involved in countless productions at the Cork Opera House and Everyman Palace Theatre as a session player. He has numerous TV and radio appearances to his credit including performing live in the final of the BBC/RTE talent contest ‘Go for it’!. As a band conductor Ken lead the Mayfield Brass Band to two regional Band titles and their first National Band Title in 2001.
PERFORMANCES INCLUDE:

Tours of the Middle East under the auspices of the British Council, performing concerts and presenting workshops in conjunction with an EFL consultant.

The Pro Musica Trophy for outstanding wind student at the Cork School of Music, 2002

BACKGROUND: Born in Cork, Ireland, Ken holds an Honours Degree in music from the Cork School of Music, and received a scholarship for further study at Trinity College of Music, London in 2002. Ken currently lectures in saxophone and clarinet at the Cork School of Music and also for the Cork County School of Music.He is assistant conductor and teacher at the Gleneagle Concert Band in Killarney,Co.Kerry. Throughout his career Ken has been fortunate to study with some of the world’s finest instrumentalists in both jazz and classical fields. These include Kenneth Edge (NSOI &Riverdance), Prof. Gerard McChrystal (Trinity College London), Tim Garland (Internationally acclaimed jazz saxophonist/composer), Bob Berg (former Miles Davis side-man and soloist), Frank Dupenbecker (Dusseldorf Symphony) Dr. Gordon Foote (McGill University Canada), Tim Price (top US jazz educationalist), Scott Stromann (Guildhall School of Music London) and many more.